PLEASE NOTE: The project featured in this post is a prototype developed by The Secret Location in participation with On Look Films, Mozilla and Hot Docs (Canadian international documentary film festival). This is ONLY in the development and experimental stages and WORKS best in the GOOGLE CHROME browser.
You can download the CHROME browser by clicking on the Google Chrome logo or going to: https://www.google.com/intl/en/chrome/

As designers, developers and media-makers, we often design and problem solve based on similar solutions we see and experience. Simply put, when we are tasked on a project, we research all the solutions out there and usually base our own design solutions with the research we have gathered. Let’s say our project is website where a user can stream music based a specific artist. We would research sites like Pandora and Spotify because they are widely used and are some of the most successful. We will look at their functionality, visual design, UI (user interaction), UX (user interaction), etc.. And for the most part, there is nothing wrong with that. Those examples are highly successful and if that model works, why would we try to reinvent the wheel?

I always remember the words of a professor I had when I was studying Graphic Design in college. She said, “The reason we research is to see what everyone else has done and then realize what they have not done.”

Innovation is part of our DNA. As the human race, as a society, we strive for innovation… and innovation is what makes us thrive. If we did not reinvent the wheel we would still be stuck in the Stone Age. Instead, we have come a long way from that stone wheel. From wooden wagon wheels to tires made for winter roads, high mileage, even All Season tires that are quiet and long lasting. Heck, in some cases we have even done away with the wheel and LEARNED TO FLY! We went to the moon on nothing more than a fraction of the computing power of our smart phones today and …INNOVATION.

Creative Engineering is doing just that; Taking a concept and going to the moon with it. To the moon and beyond…

It is taking an idea and creating concepts that don’t fit a mold. It’s all about creating new molds. It’s not about thinking whether something is possible or not, but rather thinking how to make it possible. It’s crafting a unique and creative solution that works and works well. Creative Engineering is nothing new. Apple has shown us over and over again with products and applications worthy enough to be called innovative. I’m not even that big of a fan of Apple, but I do recognize how much one company has changed our lives via technology, software and devices as well as the way we interact with them. I sometimes think that Creative Engineering is not a skill or talent, but a vision. A way to see the bigger picture of a problem, find the appropriate solution and to go beyond that, and really make it something special.

A team of collaborators and I have been working on a multi-platform project since 2008 as part of On Look Films. The project’s goal is to document the tradition of the adhan (call to prayer) as it is in Cairo, Egypt. If you’re unfamiliar with this tradition, here are just a few bits of info you need to know so that the rest of this makes sense… a (very) brief and short cliff’s notes if you will:

Our starting point is a feature documentary which documents some of the muezzins through the lens of the call to prayer. (You can learn more about the film by visiting the On Look Film’s website.) As auxiliary projects, in conjunction with the film, provide a way where users can experience the content we collect while making the film as well as the content we will collect once we obtain the proper funding for that portion of the project. As the acting Multimedia Art Director/Creative Engineer of On Look Films, I have always been keen to come up with an interesting way for users to explore and look at the information that will be featured. It has always been my goal to figure out how the user will interact with the information provided. After many discussions with the team and the project’s leader, Anna Kipervaser, it was clear that there needed to be an exploratory way for users to view the content. Not just a simple database of text, images, video and sound elements, but rather to create a vehicle that combines all of those elements together and seamlessly. To make it as close as possible for how we all experience information on a daily basis… in real life. I would love to see something where you engage the information and interact with it, explore all the nooks and crannies of it. A fluid experience that is intuitive yet complex enough to where you can get a whole new experience the second time around. While we are still a ways from developing this and far from our goal, we did get a chance to work with some amazing people and… something magical happened!

In late April of 2013, Anna Kipervaser and I were invited to team up with Mozilla and a Toronto based interactive agency, The Secret Location to a 2-day Hack-a-thon as part of an event at the Hot Docs conference in Toronto, Canada. Hot Hacks was 2-day event that brought filmmakers and technologists together to create another platform to tell the story of the documentary the filmmakers were working on. The challenge was to create a finished, working prototype. Did I mention, they ONLY had 2 days?

The reason I say “they” and not “us”, is because I was only able to make it to the 3rd day… the day where all the teams are presenting the finished web-doc. Although I really wanted to be apart of that experience, I’m glad I wasn’t. I feel like I would have had some preconceived notions and expectations. Instead, Anna bravely went ahead of me and attended on her own… and I am so glad she did! She went in without any clue as to what was possible… rather, what was not possible. I think to her, anything was possible. And that is exactly the type of mindset that was needed to create the following web-doc.

I know I am not only speaking for myself when I say that I am deeply grateful for the hard work that Anna and the talented gentlemen from The Secret Location. They are truly innovators and Creative Engineers! 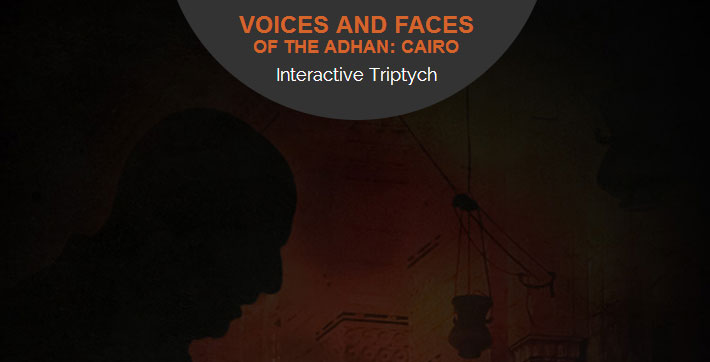 This interactive online experience was created during Hot Hacks, a weekend of hacking that a project for On Look Films was chosen to participate in as part of Hot Docs (Canadian international documentary film festival). Anna Kipervaser from On Look Films worked together with a team from The Secret Location and Mozilla in Toronto, Canada to create a prototype that features three vignettes in an Interactive “Triptych”, each with a distinct user experience.

Discover:
A learning experience that began before sunrise and ended after sunset. Throughout the course of a day (corresponding to the five adhans) five characters are discovered and introduced using their locations as markers.

Experience:
A way for the user to move through a map and experience what Cairo feels, sounds, and looks like via gps tagged audio and photographs.

Create:
Calls for the user to create the soundscape of Cairo by clicking on what is at first a white screen; clicking in each location triggers the sound of an individual adhan and visualization through which a faint image of Cairo’s cityscape begins to be revealed, the more you click, the more gets revealed visually and sonically.

This prototype is viewable, with great thanks to the Secret Location team, at http://onlookfilms.com/hothacks. Please keep in mind that it is still a prototype and the elements that work, work best in Google Chrome.